My bikes and why I ride them part 2: it’s mountain time! 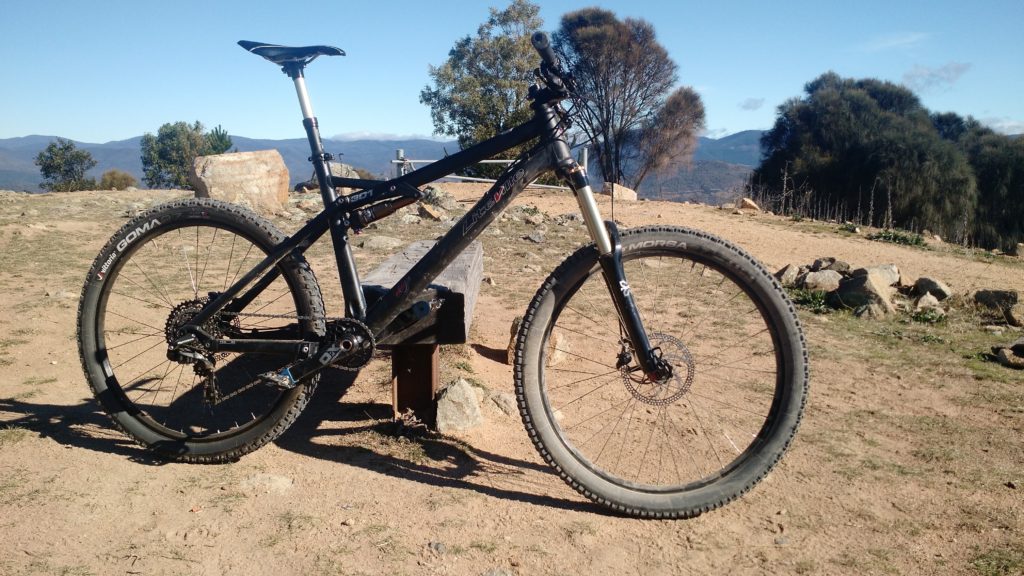 It’s my go-to weekend bike, and gets occasional commuting duty when I feel like taking some extra time to go see the trees on the way to work. I race it in gravity enduro format, and the occasional local club DH round. It is a mountain bike, built for one purpose: to ride mountains.

Why did I choose this bike?

I’ve been riding in the woods since 1998, with a few distractions like travelling here and there. So it’s fitting that after ticking over 40 years of existence I should finally build myself an appropriate bicycle.

After a lot of deliberation, I took the plunge on the Liteville 301. What led me to this bike? It’s actually hard to say, it was definitely not love at first sight. And I could have saved a fair bit of cash going round to the local big brand dealer and buying something off the floor. But then I saw this video, started reading more about the company and the design philosophy behind the bike, and was pretty much hooked. I wanted a bike for riding mountains. It needed to be precise, agile, efficient and reliable. I wanted to be able to race it, and also ride 50 km randomly on a Sunday, and also head into the random mountains of randomness. I wanted something low-ish, long-ish and slack-ish – hitting modern mountain biking geometry right on the head. So the more I pondered a bike to suit my needs, the 301 became a lot more attractive.

After a few years of wishing, and a good few months of cash burning a hole in my pocket, the 301 turned up.

It is an improbably good platform for cycling evolution. I’ve learned more about how to ride a mountain bike since I’ve owned this machine than in my entire mountain biking existence before it. That’s no exaggeration, it really is a tool for personal development, and I feel like riding in mountains has become exponentially more satisfying. I’m probably not much faster on this machine, but I see the trail totally differently. I can extend my own limits, face some fears, and push myself to learn and grow with confidence.

How do I ride it, how does it feel, what do I do with it to make it work for me?

There are a few quirks about the 301 – it is not as low as some people would like, and the chainstays are unfashionably long. But it’s plenty slack! It prefers to ride in ‘unshakeably stable’ mode – and requires a touch of body english to pop and play with.

I’m a big unit, and found that I blew through all the rear travel too quickly – so adding larger volume spacer to the shock helped a lot. I’m also finding that a shock with more mid stroke support would be awesomely helpful, but that is for later. I run about the recommended sag, and generally leave my CTD shock fully open in descend mode all the time. Rebound is about 3/4 open – so pretty quick. It recovers quickly when I jump off stuff, but needs a bit of conscious control at launch time.

Up front I ride with very little high speed compression damping (fully open), and about 3/4 closed low speed damping. This helps immensely riding big bermy things. Like the rear, rebound is pretty quick. Sometimes maybe too quick! But – I like it to spring back with authority after landing a drop, and be ready to skip around on rocks. After decades of riding hardtails, I still prefer to dance rather than plow.

Overall I find this thing needs to be ridden in the middle of the bike. There’s plenty of reach to move around and shift your weight. I found myself dropping chains a bit, but realised that this was a function of me sitting too far back on the bike. Hammering into a chundery rock garden, shift forward a little and give the forks some work to do! It is a good strategy so far, and the bike responds extremely well to assertive riding. It’s tidy and predictable in the air, and, well, it just works!

Yes. I would very happily help you set up on a Liteville.

I will buy another one if this one dies, I think this is my go-to mountain bike for as long as I can ride. The one thing I would change on my current version is the shock. It is fantastic for normal riding, but doesn’t have enough mid stroke support for racing. Liteville now specify a shock that is well known for it’s mid stroke support.

Sometime in the near future, I’ll replace the air can with a Vorsprung corset, and if that isn’t up to the job, probably aim for a Fox Float X2. I would also like to experiment with a slightly slacker head angle, but that’s for another day. Also, I would probably put a different seatpost on it, the Strate has been great, but I’m after a bit more travel. I’m caching some coins for a 9point8 150mm travel post next, but I also hear great things about KS posts. Oh, and then there’s Eightpins…

This bike is the boss, and I’m extremely happy to be able to ride one. The end.